Only successful images is what you should keep in your mind! 😉 Welcome back dear friends, the US, Solomon Islands, India, Brazil, Romania, Hungary, Italy, Ukraine, Nigeria 😉

We received a letter that asked about Lady Godiva; whether she was a myth or a real person.

To tell you the truth, it has been very awkward to figure out if she was either. Some historians confirm that she was a real noble-person who was married to an English

Lord in the 11th or the 13th century and that she stood against her husband for the sake of the people who were drained off by her husband’s outrageous taxes.

One story mentioned that her husband dared her to ride a horse naked during day time in that village where they lived if she wanted him to cut down the taxation he imposed on his people, and that she did rode a horse naked but covered her body with her long long hair.

Over the years the story evolved like any other and became like a symbolic legend. It had a female character who was brave enough to step out in the face of a tyrant who happened to be her husband. Thus Lady Godiva was a symbol for women’s independence in a way, and a chevalier for representing people’s defy to pay that high taxes their Lord wanted them to pay.

The story was endorsed, repeated  and evolved by many people; however the majority considered it unreal and considered it similar to Cinderella or Robin Hood.

There has been a number of fine paintings and art pieces that represented Lady Godiva. No-one can claim being an heir, I guess. 😆

Many TV shows talked about the story of lady Godiva and movies were produced around that theme as well. 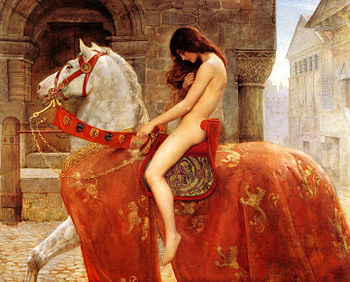 Hilda, one of my students said that: “the picture to the left could not be a good representation for Lady Godiva since it has her posture not in a pride way. She looked like as if she was forced to ride the horse. She seemed to be ashamed or embarrassed and the hair did not cover the whole body as described in the old version book for that story.”

I thought that she had a point, but may be that painting was not meant to really represent the real story if it was no a myth, who knows!

Most historians consider her nude horseback ride a myth, Lady Godiva—or “Godgifu” as some sources call her—was indeed a real person from the 11th century. The historical Godiva was known for her generosity.

As you see the problem of taxes had very deep origins, I wonder why? 🙄

Until we talk again, let’s do more research among our topics, probably we would find the right inspiration for you, with our hugs and kisses ❤