Wow! What an incident! We need to be well-trained and ready for such…First, welcome to our site the US, Canada, India, Sri Lanka, n the UK 😉

A quote I read that says: “A smart lawyer can keep a killer out of jail, a smart accountant can keep a thief from paying taxes, a smart reporter could ruin your reputation- unfairly.” I’m not sure that this is true though 🙄

Being smart is a quality that we all expect a thief to have, but there’s always someone else who is outsmarting this person. “Few of them were thieves just for the sake of the

Snatch theft is a criminal act, common in Southeast Asia, South America and Southern Europe, of forcefully stealing from a pedestrian’s person while employing rob-and-run tactics. It is typical for two thieves to work together and ride a moped to make theft and escape easier. A person steers the vehicle while another, the snatcher, does the act of theft itself. However, some snatch thieves work alone or do not use a motorcycle to rob.

Mary, 1Zumba friend, sent us a letter, explaining that since the day that she got robbed by snatch thieves who were in a small car, she was so depressed and crying, for the loss of a huge amount of money, in addition to her personal docs, such as passport, ID, etc.

She said she was talking over the phone, and she had her bag on her arm, and once she finished the call, and started to cross the street, that car appeared suddenly, and there was a guy sitting next to the driver in the front seat, who got almost half

of his body out of the window, so to grab her purse, very violently, and because she didn’t want to let go, he pushed her, while getting into the hands of her purse, which was in the middle of her arm, the inside part of her elbow.

She explained that what was terrible about that experience was the inhuman way that guy acted, just for the sake of pulling away her purse from her (and stealing her money, DAH)

“The inability to defend myself, or to do anything. Because it was completely unexpected sudden act, I couldn’t even think. It happened so quickly, and it was night time, but I thought that the area I was at, a safe one, but it was not. It was devastating, coz I had everything valuable in that purse that day, as if they knew that I had all my valuables on that day.” 😥

Mary continued her letter: “I called the police, and described the car, but I couldn’t take 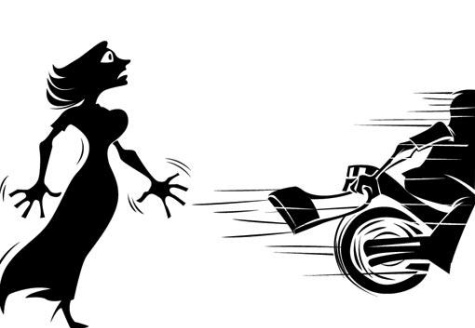 its number, it moved very fast, and i almost was dropped down to the ground, but I tried to hold myself together, and called 911, but in vain. My room-mate told me to thank God that they didn’t use a knife on me or some dangerous tool, and that I should be glad that I was alive.”

I should, but I was so knocked down that I wasn’t able to think straight.

Smart or stupid, thieves are high-risk people, who are so careless to care about how others would feel when they lose all their earnings to them. No mercy, it’s how they earn their living, so what do you expect?! 😛

We are glad that you shared your issue with all of us, and we hope that people be careful

when they walk in the street, or in areas that are known for such bad incidents. Also, try not to carry your valuables while you’re walking the streets.

When something like this happens, we actually would not feel exactly how the victim feels about it. It’s impossible to feel the humiliation of taking something away from you, and being left helpless screaming yelling crying shouting…

My guess is that we need to be more trained in the area of “Self-Defense”. Don’t we?

Love each other, and stay away from the trouble areas, be safe, and keep reading our interesting stories, which would take you places, you’ve never been to.